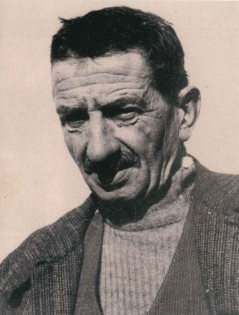 was a blacksmith, but especially experienced mechanic engine oil used in heavy goods transport vessels on Lake Como
(gondolas and comballi).
Férée Lombard dialect word meaning "blacksmith" was the nickname of the family due to the fact that his father had an activity of a blacksmith.
A man of many interests but bashful in the first place mechanics and engines then the mountain in all its aspects from
climbing to skiing.
In maintenance of the boat's engines had a notable success was known in several areas of Lake Como in the small community Mandello his machine shop was so pretty popular.
Until the early years of the twentieth century gondolas and comballi traveled with only the help of the winds, but when due to atmospheric changes these were lacking, the boatmen could do was stick to the oars for boats as large as gondolas and comballi it was a rather tiring, and the transport service it suffered greatly. With the advent of steamships was also activated a service of tugboats that pulled columns of gondolas on payment commensurate with the tonnage of the boat and mileage towing.
By the early decades of this century which came a major turning point for the life of the boatmen: the introduction of the motor 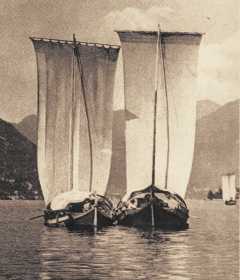 And in this workshop a not yet twenty Carlo Guzzi learned the rudiments of mechanics, is passionate about the world of motorsport. Carlo Guzzi (1889-1964) born in Milan, the son of a mechanical engineer and designer, was from a wealthy family usually attend Mandello del Lario as the family had a holiday home on. With the early death of his father (1906) the family (mother and 3 other siblings) decided to settle permanently in Mandello.
At the outbreak of the First World War, the Guzzi was called up at the squadron seaplanes S. Andrea in Venice as an engineer sergeant. Officers riders on that team were Giorgio Parodi, who comes from a wealthy family of ship owners from Genoa, and from Brescia Giovanni Ravelli, pilot of motorcycles in the years before the war. The partnership between the three became very intense, cemented by a passion for mechanics and for motorcycles
In the months immediately following the end of the conflict remained Ravelli victim of a plane crash and the projects that the three friends were long stroking was continued only by Parodi and Guzzi. These had grown by the time the ambitious project to develop an innovative model of motorcycle engine that would offer, in addition to excellent performance, great reliability and security .... the dream of Carlo Guzzi .... with the financial support Giorgio Parodi's father in 1919 in the workshop of his old friend Giorgio Ripamonti was assembled the first prototype of a motorcycle called GP (Guzzi-Parodi)

Following Giorgio Parodi to avoid, it is said that the name of the prototype were confused by his initials, and a form of reserve understandable to those who know the reluctance of capitalists Liguria, wanted to introduce the name 'Moto Guzzi', which assumed the value of the trademark. So, in 1921, the "Società Anonima Moto Guzzi»
The Moto Guzzi brand is dominated by the symbol of the Italian Air Force: the eagle with spread wings in memory of friend Ravelli.

ARTICLE APPEARED ON THE REVIEW OF THE MOTORCYCLE December 15, 1920 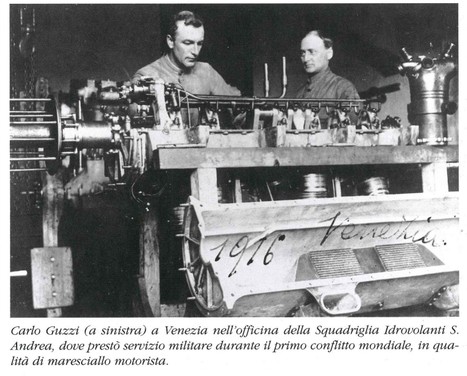 At the Museum of Moto Guzzi is kept the prototype of 1919 and we can read the caption:

"..... the first motorcycle built by Carlo Guzzi with the fincial aid
of Giorgio Parodi in the smithy of Mandello blacksmith Giorgio Ripamonti..... 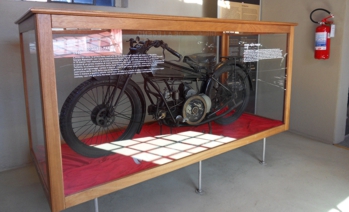 it is right at this point to recall that Giorgio Ripamonti beyond a great mechanic was also a passionate mountain, and was part of the group of persons involved in the social life and mountaineering activities of Mandello who adhered to the foundation of the office of Mandello del CAI Lario in 1924.

But Gino Carugati and Giorgio Ripamonti, September 25, 1910, after their historic first ascent of Sasso Horse (1923 m), in Grignes, they felt just that: completely surprised. And indeed they had every reason, given that they had just passed the most repulsive of the famous group hanged limestone Lecco: that bastion of 400 meters, in the following decades until now, has never gone out of fashion, becoming the theater of business signed among others by Riccardo Cassin (is his way of 1933), Nino Opium (which in 1938, in five days, drew a line absolutely spectacular)

THE FOUNDING MEMBERS AND THE PRIME LOCATIONS
The idea of ​​giving birth to a section devoted to Cai Grignes and headquartered at his feet, came to some protagonists of mountaineering and social Mandello.
The main instigator of the initiative was patt 'Gino other Carugati, pioneer of competitive skiing. He saw in the mound ideal playground to test physical and moral strength, but he also knew the pitfalls and firmly believed that the practice of mountaineering ask local knowledge, technical skills, awareness of its limitations, the most experienced guide: own what they offer sections of Cai.
With Carugati, founders of the Section were Carlo Carcano, comini Domenico, Giuseppe Fasoli, Evangelista Ferrario, Giuseppe Guzzi, duty Mainetti, Galdino Pini, Giorgio Ripamonti, Caesar Sodano, Franco Vercelloni, Vido Giuseppe, Giuseppe Zucchi (Runchet) and others. 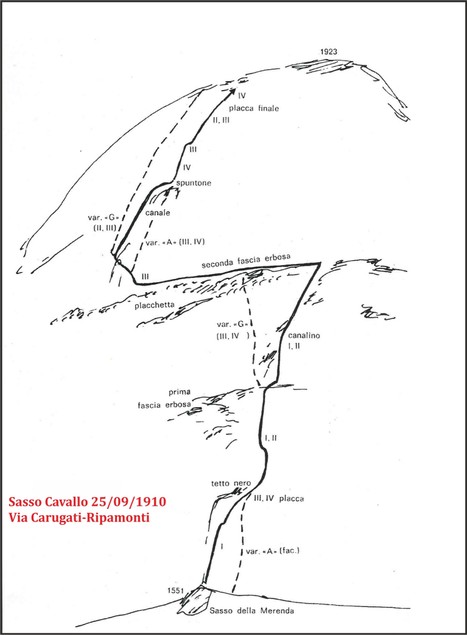 Carugati Gino (1885-1952) in 1907 had married Mary's sister Carlo Guzzi also shared her passion for the mountains with her husband several ascents to remember also the younger sister of Carlo Guzzi: Fanny she also appasionata mountain. We can therefore imagine that Giorgio Ripamonti was very close to the family Guzzi, both for their collaboration in the enterprise of Charles and for the passion towards our mountains.